JULY 8. About 5 miles east of Quebec City are the Montmorency Falls and the bridge to Isle d’ Orleans.  Consisting of 6 separate villages around the perimeter of the island the main road passes through the villages and past many farms.  Jacques CARTIER called it Île de Bacchus in 1535 because of the vines growing there, and rebaptized it Île d’Orléans in 1536 to honor the duc d’Orléans. In 1636 the island was granted to 8 associates by the Compagnie de la Nouvelle France. It became Île Sainte-Marie during the HURON settlement of 1650-57.

Here’s a wiki link with info:

Besides the great views of the St. Lawrence River, the architecture, vineyards, farms, flowers, and fruits, strawberries and raspberries are in large supply.  The gardens are well-kept and productive.  We talk about coming back here next summer.

JULY 9. We motor north on the east side of the St. Lawrence toward Rive du Loop, through many small towns and past legions of cyclists.  We stop at a small café for a petit de jeuner.  At Mont Joli, we turn south toward New Brunswick and stop for the night at a campground near Sayabec on Lake Malcolm.

JULY 10. A scenic drive along the Salmon River, many wading and shallow boat fishing people.

Going farther south from the province of Quebec into New Brunswick we put down in Kouchibuguac National Park on the Gulf of St. Lawrence near the Northumberland Strait. View here below from the park out to barrier islands and the Gulf beyond. 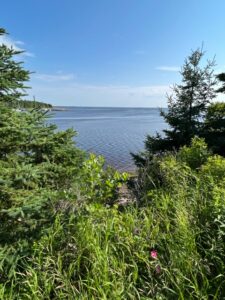 JULY 12-13.  A morning stop for laundry in Moncton, NB, a missing sock found later, and on to Elm River Camping near Truro, NS.  Need to do some map work and research to decide which direction to go from here. We have two weeks in Nova Scotia before we board the ferry at North Sydney on August 2 and need to be there the night before for early morning departure.  So, from here, do we go to Prince Edward Island or do the Cabot Trail on Cape Breton?  Or do we explore one of the coastlines or the interior?  Many good choices and we will read some resources and look up various possibilities. One thing that has changed significantly in our years of traveling is the internet connectivity.  Now it’s everywhere although TV with our equipment is not working here and that’s fine.  Secured a five-day reservation at Cavendish campground in the P.E.I. National Park and will head that direction in a few days.

JULY 14. There are numerous provincial parks in Nova Scotia and we find one not far from Truro called Five Islands and we are able to get two nights reserved at this park.  It is based on the hill overlooking the Minas Basin in the Bay of Fundy, famous for its high and low tides.

Tidal changes 47.6 feet from high tide to low tide however, tidal changes in the Bay of Fundy have been measured in extreme conditions at 53.5 feet.  Here’s a photo of the Basin at low tide. 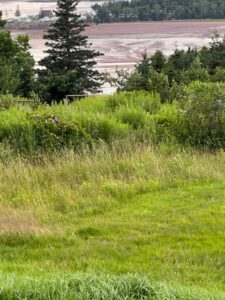