Three days out from launch, a brief summary with the following highlights:

June 16 –Departed Tubac, AZ and daytime temperatures over 100 degrees.  Headed north toward cooler temperatures, and following our Atlas red roads, no interstates, except when necessary practice, we passed through Tucson and on to Show Low in the high country, driving through the spectacular White Mountains.  Found a convenient campground, the K-Bar RV Resort at the edge of town.  Show Low got its name from the winner of a card game who showed the lowest card, a deuce of clubs, the name of the main street there, by winning large parcel of land, thus the name.

A highlight of Show Low was the Café, not only with a great menu of comfort food, where we had breakfast on Day Two and met Sarah, whose story I hope to write later via an interview.

Suffice to say here that her “farm” that includes 87 goats, 57 chickens, pigs and a local business of milk, cheese, yogurt, eggs, produce, etc. is a fascinating enterprise on a few acres. And, she works 3 days a week in town.  More on Sarah later.  This is one of many things that makes travel off the beaten path interesting and enjoyable.

June 17 – From Show Low we go east to pick up US 191 north through Navajo Lands, through Chinle with a stop in Ganado at the historic Hubbell Trading Post. 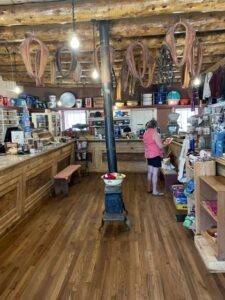 Then it was on north toward Cortez, Colorado, arriving around 4:30 PM, Mountain Time. As we change time zones, we make the necessary adjustments to clocks and bodies.  We covered 522 miles, more than our average day of driving.  With fewer cars on the lesser traveled roads, the only real obstacles are one-way bridges under construction, regulated by traffic control lights, a minor inconvenience.

We knew of a campground south of Cortez where we had stayed previously, called ahead for a reservation and had no problem getting a good spot at the Ute Mountain Casino RV park called Sleeping Ute.  Apparently there’s a mountain ridge that appears like a Native American lying on his back, thus the name.  We tried to make it out but maybe had a bad angle?  The winds overnight were relentless and we wondered briefly if we should hunker down there for another day and opted instead to continue on that next day.

June 18 – Our map highlighter pointed us in the direction of Durango, Pagosa Springs, Monte Vista and Alamosa, across half of southern Colorado from Four Corners.  That’s where Utah, Arizona, New Mexico and Colorado touch their respective corners, SE. NE, NW and SW respectively.  We have been on that route previously and it is familiar.  We were glad to see the mountains, Wolf Creek Pass,  the Ponderosa Pines, waterfalls, streams cascading over boulders.  We commented on how Pagosa Springs has changed (exploded) over the many years we’ve known it and enjoyed the hot springs there a long time ago.  So many pristine Colorado mountain towns have become tourist destinations and have undergone dramatic changes in population and development.

That is not the case with our stop this night near Mosca, Colorado, adjacent to the Great Sand Dunes National Park.  This camp site is referred to as dispersed camping, meaning that on public lands such as that managed by BLM, this one part of the San Luis Valley Open Spaces, people find a campsite that is evident by a cleared spot of land and often a previous campfire site of a ring of rocks.  Even here, in this somewhat remote spot, we have wifi and satellite connections if we need them. 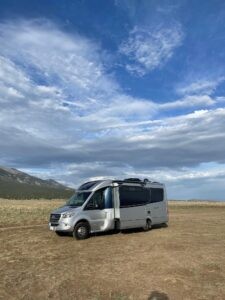 With mountain driving, rain showers, stops for fuel and groceries, we covered only 226 miles today, slow going and steady ahead