Leaving the beach in Tamarindo, we drove via Liberia, past the Daniel Oduber Quirós International Airport (LIR), smaller than San Jose, Juan Santa Maria (SJO) and more accessible to the northern sections of Costa Rica. We connected onto Rt. 1, traveled south to Canas, then north around Lake Arenal to Fortuna and Arenal Springs.  If anyone wants to follow this on a map, I suggest the Nat’l Geographic Adventure map of Costa Rica.  As with many countries, there are numerous cities with the same name and I circled another La Fortuna, the wrong one. Fortunately, we did not make the mistake of going there, as our destination with the same name, Fortuna, we knew to be closer to the Arenal Volcano, the cover photo from our front portal for this blog.

Arenal Springs and Nayara Resorts are 7 km. west of Fortuna. We spent 3 days in the former and 2 days in the latter.  They are adjacent to each other, both in the rain forest and in the Arenal National Park, in a protected, conservation area. The Nayara Resort is one property with three separate and adjoining facilities (Springs, Gardens & Tents) that have access to all three and their various amenities.  We opted for the Gardens. We had our own pool and looked out into the jungle from our portal, no other accommodations visible through the thick foilage, although they are nearby.

There are numerous eco-tours from either of these places or any of the over 100 other accommodations in the immediate area.  We had a safari river float trip with Canoa Adventures and saw a number of species of wild creatures – birds and bats, a couple of crocodiles, one of which was dead; monkeys, herons, vultures, ahingas, iguanas of different sizes, a sloth and a couple of cormorants. 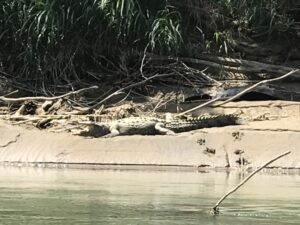 The impact of eco-tourism represents a positive result for the economy and certainly a positive effect in protecting and preserving the rain forest that resulted in Costa Rica receiving the Earth Prize.  https://www.stirworld.com/see-news-earthshot-prize-2021-winners-herald-a-decisive-decade-of-climate-action

The rest of the world can take some lessons from Costa Rica, although in addition to reversing deforestation which they have done well, this booming business of eco-tourism has created an influx of tourists and that may have some adverse impact on the fauna and flora in numerous regions. There is also spraying of insecticides to protect both people and products and that poison can hurt birds and animals plus it drains into the rivers. There is an associated cost of growth and expansion and that needs to be weighed against the overall health of the country and the people who live here, including about 400,000+ ex-pats.

The appeal of Costa Rica is its political stability, no standing army since 1948, excellent health care, emphasis on environmental sustainability, education, and a culture that values family and kindness, non -violence, and a reasonable cost of living. Costa Rica’s main exports are surprisingly, electronic components (18 percent of total exports), medical equipment (7.3 percent), pineapples (7 percent) and bananas (6 percent). Costa Rica´s main export partner is the United States (37 percent of total exports). Agriculture exports, including coffee and fruit, were dominant until 2017 when medical technology exports replaced both agricultural and tourism as the top industry. GDP $51.17 billion.  Apparently multinational firms see the advantages of Costa Rica’s market location in Central America as well as lower labor costs than in some other industrialized countries.

Our overall impression of Costa Rica is favorable with very few caveats.  Many tourists travel from place to place via small tourismo vans rather than renting a car or flying in small planes.  We opted for a 4×4 SUV because we wanted to be able to go anywhere on any kind of passable roads that can, at times, be challenging.  The main highways are good although slow because of mountains, curves and traffic.  Do not expect an average speed much above 35 mph and once you adjust to that mindset, it is fine.

Our return from Arenal to SJO brought us down through the Central Highlands with rolling hills, farms and a few small villages to San Ramon where we picked up Rt 1 back toward the airport. A delightful drive with great vistas, very curvy and hilly roads and narrow bridges and we loved it.   We stopped in Sarchi and visited a very old, still working, factory that makes decorated ox-carts with the largest one in the world on display in the central park. 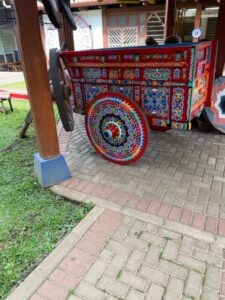 If you are interested in visiting Costa Rica and want to look at a resource we used and found valuable, consider “Costa Rica” by Nikki Solano.  Pura Vida my friends.